Stability and precision at the highest level of the class

Compatible with a wide range of applications in regulating the temperature of the circulating water. 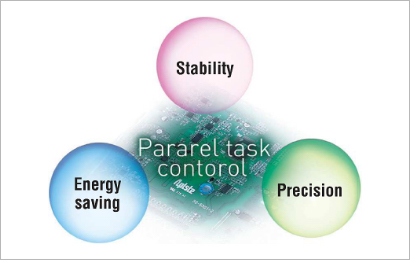 Operation pattern is selectable from three types of control mode in match with installation environment and versatile applications. Efficient and optimum performance can be fully demonstrated conforming to purpose of application. High-precision mode infinitely good in precision, eco mode in pursuit of energy efficiency, and normal mode with high stability are available.

Control mode putting emphasis on responsiveness and stability. When control shifts either to cooling side or heating side, stability can be maintained by its following capability.

Control mode putting emphasis on energy saving and responsiveness.
In cooling, operation at low power consumption is enabled without using a heater.
This mode is also effective when load fluctuation and disturbance are great.

"Control mode effective when control of higher precision is required.
The true value is demonstrated in any temperature range from -10°C to 80°C."

Temperature control range by Apiste's parallel task control is a wide range from -10°C to 80°C. Continuous operation is enabled in all ranges without stopping the compressor. There is no instability by ON/OFF control, and high stability and high precision are always realized in any temperature range.

Heater capacity was reduced by 90% in comparison with conventional freezing cycle 100% + heater control, and realized the energy saving. 15. Wide range from -10°C to 80°C 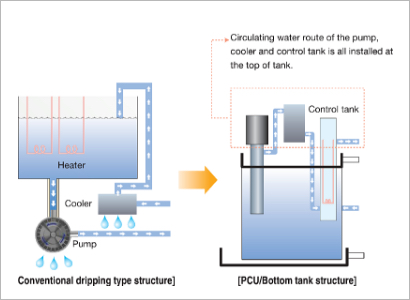 All the parts along circulating water route are installed at the top of tank, which is a structural design unique to Apiste. We adhered to the development of the top installation which is ready for accidental leakage. Newly developed high performance pump pumps up circulating water in the tank to the top, and feeds reliably up to the equipment. 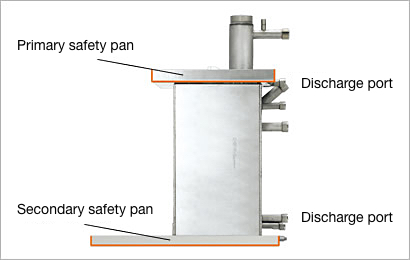 If any trouble should occur, leakage of circulating water is prevented from PCU unit to outside. Thorough measure against leakage is enabled by installing a primary safety pan at the top of the tank, and making the bottom of chiller unit the secondary safety pan. It realizes a high reliability on the field. 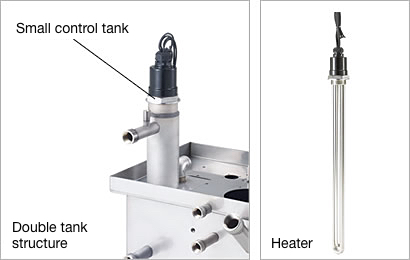 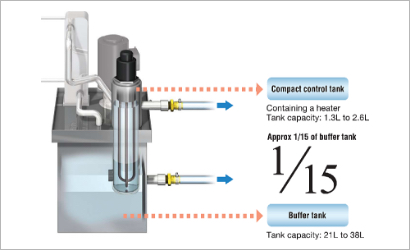 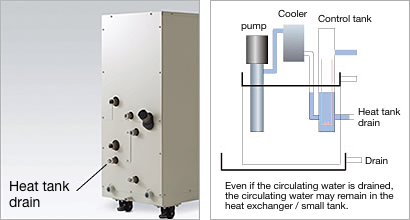 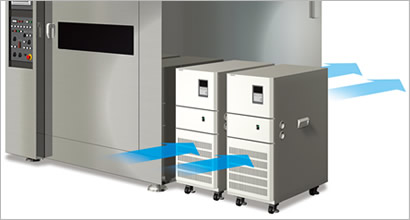 The air-cooling type is designed so that the intake / exhaust paths for heat exchange are in the front and back of the main unit. Unlike the case where the intake and exhaust ports are on the side of the main unit, it is also possible to arrange multiple units closely. This saves space. 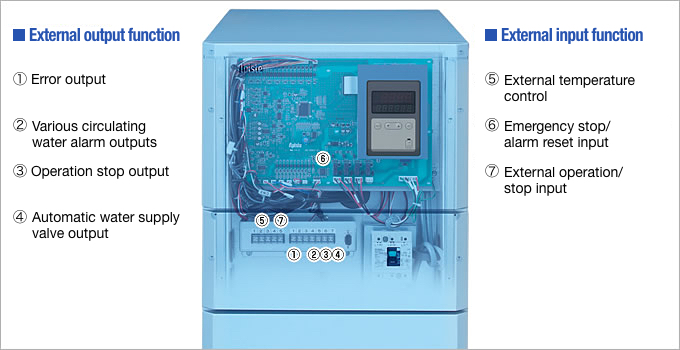 Equipped with non-voltage contact output with maximum load current of AC250V 2A. It can be output to the outside when an alarm occurs. Not only can you communicate with the PLC, but you can also control patrol lamps and buzzers. 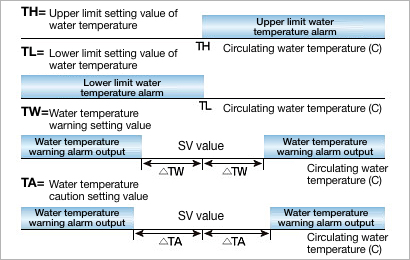 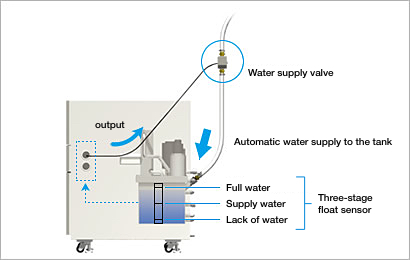 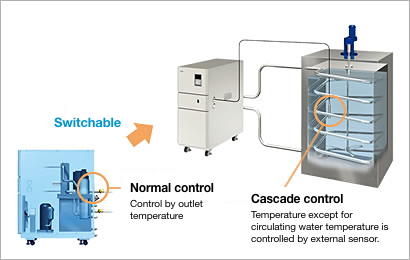 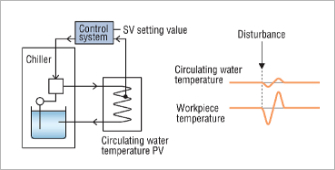 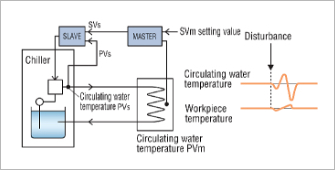 Equipped with an emergency stop input just in case. The chiller can be forcibly stopped by an external signal. It is possible to link the water leak sensor installed separately and the emergency stop button installed on the controlled device. E-99 is displayed at the time of emergency stop input and can be confirmed as a history. It can also be used by switching to the alarm reset input if necessary. 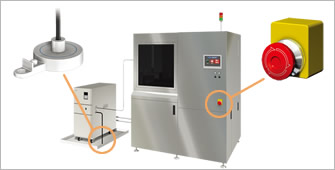 Emergency stop input can be switched to alarm reset input 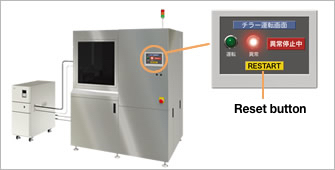 Equipped with an external control input terminal that can be used to start and stop the PCU body from an external device. Since it has a dedicated circuit, it can be operated from the outside simply by preparing the contact signal. When used in combination with the operation / stop output, a higher and more reliable external control can be realized. 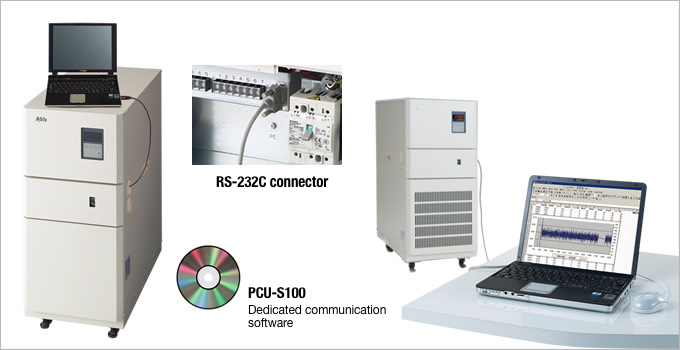 Equipped with RS-232C as standard equipment for remote control and error code identification from equipment, and operation data collection with dedicated software to support various analyses. 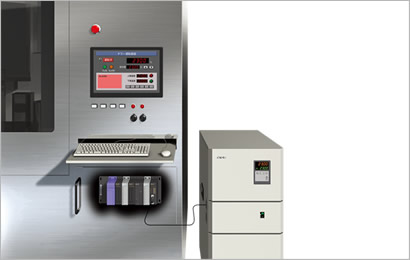 Change the control settings and output settings from the device side. The settings can be changed according to the situation at the site, enabling optimal control. It is also possible to identify up to 31 error codes that the PCU unit has. 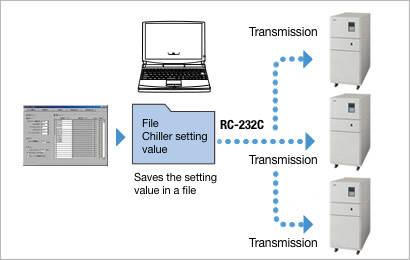 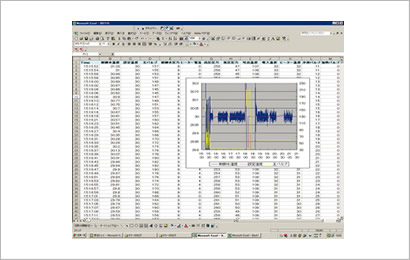