This section provides a description of air, the air condition and how it is represented.

Oxygen is essential to our lives. This oxygen is taken from the “air” that exists naturally around us. We call the gases in the layer surrounding the Earth the atmosphere, and we generally refer to the gases around us, including water vapor, as air. 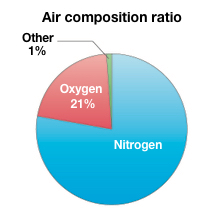 Nitrogen is a colorless, tasteless, odorless, and non-toxic gas.
It is the most common component in air, accounting for about 78%.
As it is an inert and inexpensive gas, it is used as an inert gas in production sites.

Oxygen is a colorless and odorless gas. It is slightly bluish in color when in the liquid and solid states. About 21% of air is composed of oxygen.
It reacts with other elements to produce an oxidized compound.
Oxygen is inhaled by organisms and consumed by combustion, but is produced by plants through photosynthesis.

Argon is a rare gas element that is a colorless, odorless inert gas that hardly causes any chemical reactions.
It is the third most abundant component in air, constituting about 1%.
It is widely used as an inert gas for welding and silicon manufacturing etc. 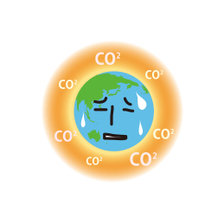 Carbon dioxide is a colorless, odorless gas.
At atmospheric pressure, it is not liquid but at -79 °C, it solidifies to become dry ice.
It is generated during breathing or combustion. As a greenhouse gas that causes global warming, carbon dioxide emissions have become an issue, and people are looking to reduce CO2 emissions globally, especially in developed countries.

Air can be broadly categorized as follows.

Air contains a variety of components, but in theory air that does not contain any water vapor is called dry air. 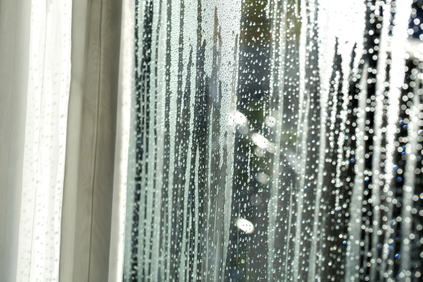 (4) How air temperature and humidity are expressed and their types

○How temperature is expressed and its types

1. Dry bulb temperature [°C DB] (DB… Dry Bulb)
This is what we normally refer to as the normal temperature. It can be measured with a stem thermometer containing mercury or alcohol.

○How humidity is expressed and its types

(5) How to express air pressure and its types

1. Absolute pressure [MPa] (kgf/cm2 abs)
A state in which no gases exist at all is known as a perfect vacuum, and the absolute pressure is the pressure using this absolute vacuum as a reference.
It is mainly used for thermodynamic discussions.

Next item: 1-2. About air conditioning