This section explains how the refrigeration cycle used in air conditioners and cooling equipment works.

(1) What is a refrigeration cycle?

So far, we have studied the principle of cooling things in “1-3. Principle of cooling”. When a substance evaporates, it takes away a large amount of heat from the surroundings, and when it condenses, it releases a large amount of heat into the surroundings.
Based on this principle, in order to continue cooling the space, it is necessary to continuously supply a substance with a large amount of evaporation latent heat in a cold liquid state into the cooling space, and vaporize it continuously. In order to do so, it is necessary to take the heat away from the vaporized material that was heated and return it to the original cold liquid state.
The substance to transfer the heat then is called a refrigerant. The mechanism to control the change in temperature and state of the refrigerant so as to perform cooling continuously is called the refrigeration cycle.

(2) How the refrigeration cycle works

Generally, steam compression refrigeration cycles are most often used in room air conditioners and industrial cooling systems. It is composed of four elementary components, namely the compressor, condenser, expansion valve (capillary) and evaporator. The inside of the system is sealed, and the refrigerant is circulated in a constant direction to perform cooling following changes in the state of the refrigerant. 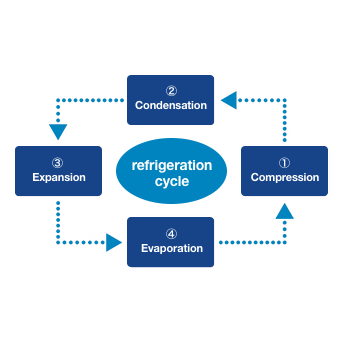 Speaking in terms of room air conditioning, the process is akin to that of an outdoor unit. The refrigerant which reached a high temperature and high pressure in (1) is cooled by the surrounding air and water in the condenser to condense it. The temperature of the air and water used for cooling rises as condensation heat is released. In this way, the evaporation heat absorbed when the space is cooled and the adiabatic heat received from the compressor are released outside of the cycle.
The refrigerant at this point changes from a gas to a liquid, becoming a high temperature and high pressure liquid, but the temperature does not change as only the state changes.