3-1. Maintaining a proper environment inside a control panel

This section describes the need for environmental measures inside the control panel and how to implement these.

In recent years, FA-Factory Automation has become common in production facilities. In the factory, robots and automatic machines are situated not only on the first floor, but also cramped onto the second floor. This evolution can be said to be a natural flow in order to reduce cost by mass production.
However, while low-cost mass production may be possible, other disadvantages may also arise e.g. the heat emitted by robots and automated machines can adversely affect control equipment. In particular, as electronic devices become smaller and more functional, machines and panels are further reduced in size. Heat generation itself is on the rise, further affecting electronic devices.
Although control equipment which have become higher in speed, performance, and functionality offer the advantage of improved efficiency and processing speed, they can be said to suffer from the disadvantage of having to be installed in an environment where “heat, dust, and moisture” are not suitable for the control equipment.

Let's take a look at how control equipment problems are affecting actual production activities then.

For example, assume that a control board has stopped. Even if it is only for 10 to 20 minutes, as the production line is integrated from the pre to the post processes, an interlock will also be applied on the lines before and after the control panel which stopped, thereby stopping the machines.
In addition, if furnaces and other equipment are stopped, restoration is likely to take one to two hours for sure. In other words, taking into account the restoration of the lines before and after due to the failure of a single control panel, it is likely that a loss of around two hours will occur.

For example, assume that an inverter has stopped. Naturally, if you replace the inverter, you will incur the purchasing cost of the new inverter. Replacing the board alone would probably cost tens of thousands of yen.
If you do not have any spare parts, it may take several days or even weeks depending on the situation. If it is an old inverter, the production may also have been discontinued. Separate charter expenses will be required for remote locations or emergencies etc. Furthermore, if you hold stock in anticipation of an emergency, your inventory assets will increase. When it comes to increasing the number of maintenance personnel for preventive maintenance and periodic inspections, it is important to be prepared for significant costs that will lead to increased labor costs.

The issues above are happening in production sites on a daily basis. The impact of heat and humidity which often lead to sudden stoppages of machines and control panels are introduced in the next section.

(3) Impact of heat on equipment

Data has also proven that the failure rate of semiconductors and electronic components is greatly affected by heat, thereby shortening the life span. Graph (1) shows the change in the outside temperature and the temperature inside the control panel of a certain automobile manufacturer. A temperature difference of about 15 to 20 °C has occurred from the start to the end. 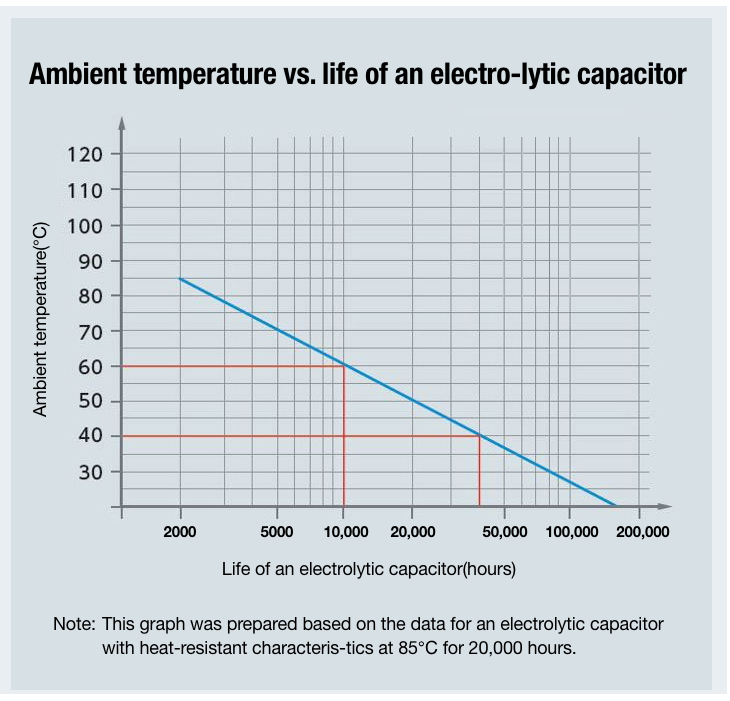 10 °C Double Law
The graph on the left shows the relationship between the life of electrolytic capacitors used in electronic devices and the ambient temperature.
When the ambient temperature rises by 10 °C, the life of the electrolytic capacitor is halved.
Due to the miniaturization and improved performance of electronic devices, the amount of heat generated is on an uptrend. Furthermore, the control panels that house these devices are also decreasing in size, so the temperature inside a control panel that is not equipped with any countermeasures is expected to rise higher than ever before.

Arrhenius Law
The graph on the right shows the relationship between the ambient temperature of a semiconductor and the failure rate.
If the relative failure rate at 40 °C is assumed to be “1”, the rate will increase exponentially to “10” at 60 °C and “100” at 80 °C.
It is also known that the permanent cooling of control devices to continuously ensure the stable operation of production lines will become an important factor in future.


(4) Impact of moisture on equipment 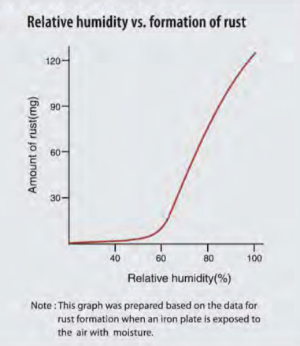 Together with heat, moisture is one of the causes of control equipment problems. Here, we will consider how moisture affects control equipment.
There are many joints in control equipment. And the arch enemy of the joints is moisture. Graph (4) shows the relationship between corrosion and relative humidity, indicating that corrosion progresses rapidly when the humidity exceeds 60%. In Japan, the humidity level is usually known to be about 70%, so measures against humidity in control devices are extremely important. In addition, it is said that corrosion progresses faster as the temperature increases, so heat countermeasures can be considered as issues that must be considered at the same time as humidity countermeasures.

(5) Conventional countermeasures and their problems 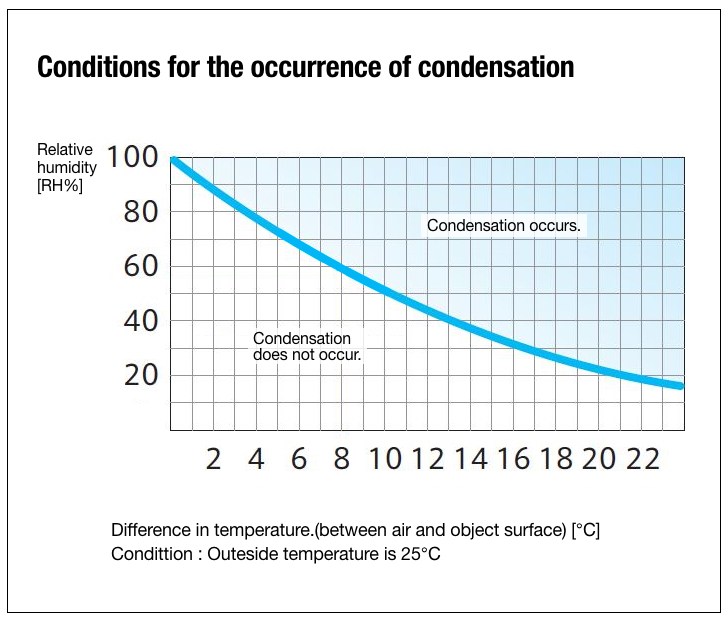 For this reason, Apiste kept the discharge temperature difference to less than 8 °C on the assumption that the humidity is 60% of the average summer humidity in Japan, and stuck to its proprietary “mild cooling design” which will not allow condensation to occur. Condensation is prevented by cooling the air slowly while dehumidifying it. The components that make up the refrigeration cycle were reviewed one by one and adjustments were made to the design of Apiste’s proprietary refrigeration circuit. As a result, cooling that is gentle on electronic devices is realized. 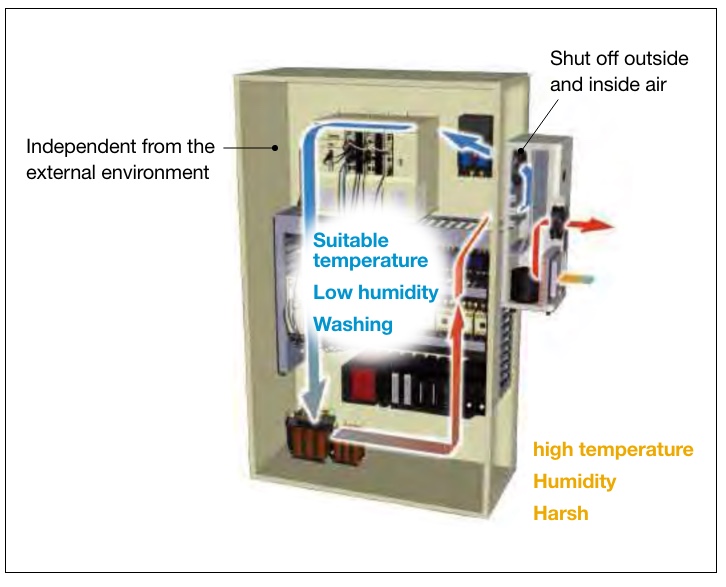 Due to its structure that completely separates internal from external air, a control panel equipped with a cooler turns into an independent sealed state spatially, which has a dust prevention effect that is unlike a cooler fan or the introduction of external air etc. This is why a control panel cooler is introduced in an environment where there is a lot of oil mist and dust.

When air containing moisture passes through a cooling coil cooled by a refrigerant, the moisture condenses due to the temperature difference on the surface of the cooling coil, and the water generated then is discharged outside. This process is known as dehumidification. A control panel is a product to improve the control panel environment so as to prevent not only heat problems but also problems caused by moisture and dust.