This section describes a chiller system to directly cool the liquid to be cooled.

Known as a chiller unit, chilling unit, or chiller, etc. (hereinafter chiller), the equipment is equipped with a refrigeration cycle to circulate the refrigerant and transfer heat so that it can force the liquid to cool down.
An indirect cooling method using the circulating water of a chiller via the liquid-cooled heat exchanger introduced in the preceding section is also available, but here we will only introduce the method of directly cooling the liquid to be cooled using the chiller body.

A cooling coil is immersed directly into the tank of the liquid to be cooled as shown in Figure 1 below, serving as a cooling chiller. When a circulating chiller is adopted, the chiller is often used to cool liquids that contain solids that may lead to clogging of the piping e.g. hydraulic oil (wear powder), coolant (cutting powder, sludge) and so on. While there are advantages in that the unit is easy to install and implement, there are also many restrictions, such as poor temperature control accuracy, need for a constant tank depth and installation space on top of the tank and so on. 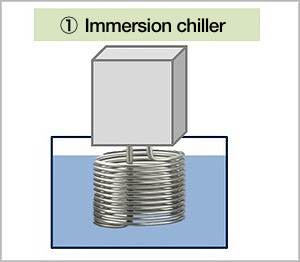 As shown in Figure 2 below, the liquid to be cooled directly is pumped from the cooling tank into the chiller body. Cooling can be carried out easily simply by inserting the piping into the tank.

(1) Oil chiller coolant chiller
Oil is pumped directly from a hydraulic or lubricating oil tank, or the coolant tank of a cutting machine etc. and cooled. It is used for cooling inside a tank in which the immersion chiller in (1) cannot be installed, or a tank where there are many constraints. The compact type used on an one-to-one basis for equipment such as processing and other machines is used mainly.

(2) Water tank cooling chiller
This chiller for water cooling performs cooling by circulating the cooling water running throughout the entire equipment from a tank or underground pit. Many large models that can cover an entire building are available, and there are also some models in which several units can be combined (modular in nature) according to the scale of the equipment.
It is often used for the air conditioning of factory equipment and commercial facilities.